I've been copying and collecting interesting pieces of text here and there for a really long while. From the articles on the Internet, while reading a book, pretty much from everywhere. Sometimes not even noting a source, but marking the text because it left an impression on me.

Never thinking about quotes management I kept it in single page of my personal wiki. No categorization of any sort, just a pile of text separated by delimiter lines.

Of course, as the pile grew I started to think about organizing it. First I tried to find already existing solution I could run myself, but there's really nothing out there. Then I tried to build it myself! Why not? I already know how to program, and I know what I need, so let's do it. But, after spending some time building the portal using the Flask Python framework I gave up. It was just taking too much time, and I didn't find a lot of motivation to finish it.

Finally, I thought of Drupal CMS. I know #Drupal, I was Drupal module developer for a really long while. I know it can do it, and it can do it easily. So I tried, and I had a solution in about 2 hours.

So, here I will describe exactly what I did, in case someone wants to try as well.

After installing Drupal with standard installation profile, I renamed its Article content type into Quote and used it as it is afterwards. I added additional taxonomy vocabulary named Author with the same settings as Tags. I want to be able to see all the quotes from a specific author.

As for the theme, I installed a simple theme named Writer. It is intended to be used with blogs, but its simplicity is really useful for my quotes project. After all, I want clean design that focuses on the text. I tweaked it a bit to remove page titles, and to have buttons as links in blocks, but that's it and the rest is provided by the theme.

As for community modules, I only use Autotitle. Quotes don't have titles, as I mentioned above, and I didn't want to create custom module to tweak new quote creation form to remove the title. So, Autotitle just names each and everyone simply as Quote. That's enough for me.

Content is rendered via Views module, of course. I only added 2 custom views. The first one renders a list of tags with the number of quotes associated with it. And the second one is showing a random quote (it only works when authenticated to Drupal system, I didn't bother to make it work for anonymous visitors).

And that's it. An hour or so of fun work with Drupal and my system is done. I can focus on categorizing the quotes now. 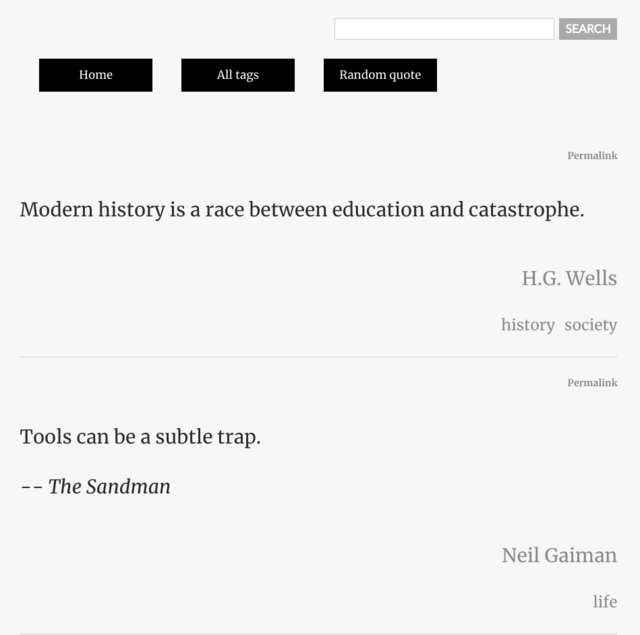 P.S I am not providing the link to my quotes Drupal since it's mine and I have no plan to make it usable for anyone else. Content is not behind login, but I don't want to advertise it either.