On the wrong side of history

At this point I don't think anyone needs to write long introduction on Russia invading #Ukraine. In the world abundant with information and relatively clear way to judge the sources one can be uninformed only if one chose to be.

Many people in my home country #Serbia chose to ignore the reality. Or are just evil, I don't know how else to explain all this.

My Serbia didn't officially condemn the invasion. Look at the map below, look at all those countries that didn't express disgust and worry after the invasion: 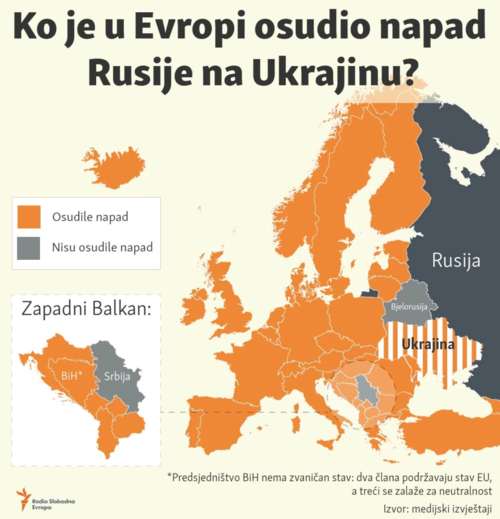 Yes, that's right, there are only two in whole of Europe, Belarus and Serbia. Most of the people in the country see the event completely upside-down: it's actually Ukraine that attacked Russia, so it had to defend itself! If you scratch below the surface during conversation you'll get regular mixture of reality denial and whataboutism.

The biggest independent political TV show hosted RussiaToday editor who was allowed to spew out lies and disinfo. Serbia is the only country that didn't have rallies of support for the people of Ukraine, but instead rallies of support for Russian troops – idiots taped letter Z on their cars, drove around hoisting Russian flags and blasting nationalistic music. Belgrade is the only capital in Europe that did that, that allowed that to happen!

Then there was a football match, the biggest in the league where two biggest teams in the capital play against the each other, the derby of Belgrade. Any idea what happened? They did this:

Graveyard in colors of the Ukrainian flag. TV crews reported Serbian hooligans hosted supporters (sic!) of Moscow's Spartak football club (they had one fun round-trip), one of them was interviewed and he was holding big cloth with “Serbia – Russia” written on it. In English. Yes, that's a Russian in another country that uses Cyrillic script as well. It is nothing but a message out.

And make no mistake about it, it is a message, perhaps the strongest one. It's a public secret in Serbia that football hooligans are the arm of the government, they're used to do all kind of dirty work (demolish buildings during the night, break protests, ...) in exchange of being let to do illegal drug distribution, among other activities. Everyone in Serbia knows that this wouldn't have happened unless the State wanted to. It's a message to likewise sociopaths. It's appalling.

The last door towards European integration of Serbia are closed now, I am certain of it. Serbian government and, to great extent, her people too chose to be on the wrong side of the history. Again.